Metis is a Decentralized Autonomous Company (DAC)-centric platform to power the web3 economy. The Metis Stack is reputation based, highly customizable, and dynamic.

Governance is a critical component for collaboration and decision-making in a decentralized environment. We believe that contributors should govern the ecosystem based on the level of their contributions following the principle of responsibility for their decisions and accountability for the outcomes of such decisions.

The issues of current token-based governance

DAOs, decentralized autonomous organizations, have held a significant, grounded position in the web3 space for years. They are specifically characterized as autonomous and transparent entities governed entirely by the community. In this type of organizational structure, all functions present in the entity can be employed without the use of intermediaries or centralized authority.

However, there are some governance-related challenges that we recognize and plan to address:

One person – one vote

Compared to traditional organizations, DAOs rely on community-based governance. Decisions are made from the bottom up, and participating in the DAO (including voting) is typically based on token ownership instead of an individual’s place or ranking within an organization’s hierarchical structure. Instead of conventional employment contracts, token governance is managed by smart contracts.

The main issue comes from the DAO’s token-based voting system. DAO governance structures tend to use the 1 token = 1 vote system. Though this system can be considered democratized and a leading step towards decentralization, it is more susceptible to oligarchical control.

Users in these communities are therefore able to vote, make proposals, and earn revenue while leveraging decentralization, autonomy, and transparency without any centralized intervention.

In DAOs, governance tokens are typically sold in the open market, which enables voting permissions. Individuals in DAOs are also typically not limited to how many tokens they can buy. That means single individuals can buy a significant amount of tokens on the open market, giving them the upper hand in voting power. In many DAOs, a few individuals can make major decisions that affect the protocol’s direction.

In this regard, though there is no defined central authority, if decision-making is concentrated in only a few individuals, is the DAO still decentralized?

This leads to a few major problems. In one aspect, a large token holder without adequate experience can make decisions. A major reason why traditional organizations still use hierarchical structures split into “groups” or “teams” is to be able to execute expertise-driven decisions. An individual with inadequate experience or expertise can lead to poor decision making which has the potential to produce negative outcomes for the organization.

The largest concern, however, lies with the potential for the DAO to be overtaken by malicious actors and whales. Given that the users with the most amount of tokens have the largest share of voting power, control can be handed over to a few wealthy participants. This is not aligned with the mission of decentralization.

Some DAOs, such as ENS, attempted to work through this problem by creating a governance structure where members vote on qualified individuals who then handle the critical decision-making. This solution, however, goes back to our original concern by compromising the decentralized vision of DAOs.

In another aspect, there is a concern with the lack of token holders to vote on proposals. The more individuals there are to vote, the more founded the decision would be to benefit the entire organization. In other words, inactive token holders can disrupt the overall functionality of the DAO by not having high voter engagement. 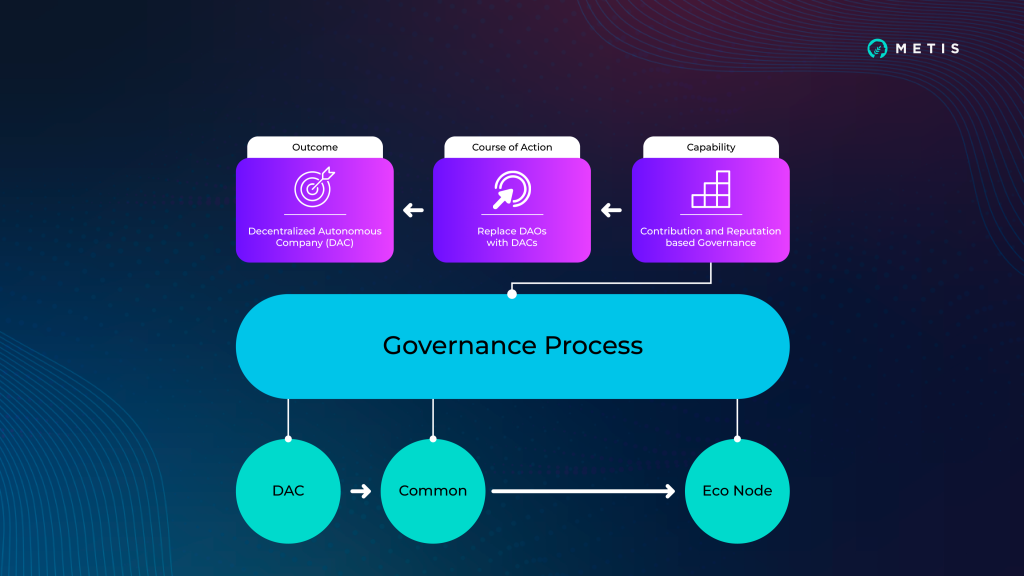 In this system, unlike DAOs, governance is chosen by people who have a reputation for contributing and adding value to the organization instead of those who have the most governance tokens. Reputation is demonstrated in the form of badges or NFTs.

In this case, the value of DACs comes from the contributions of members, not the value of the governance token or organization as a whole as seen with DAOs.

Here, we can replace inefficient token-based governance mechanisms present in current DAOs with ones based on users’ actual contributions and local reputations. Contributors as a whole can govern, not just a selected group with voting power.

With DACs, we have two main goals: 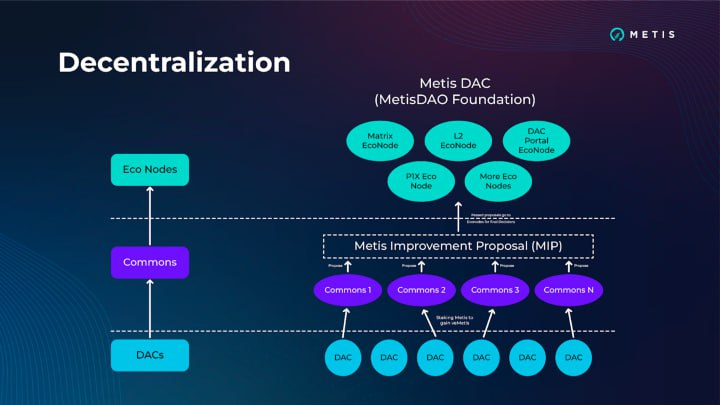 Everybody who wishes to utilize the Metis ecosystem can do so without any limitations. DAC is the “heart” of the ecosystem – it is a “business entity”, which can be represented by a person or a group of people. A person may choose to organize or join existing DAC(s). If a person would like to become a “citizen” of the platform (have voting rights and propose any changes to the platform), they need to become a Common by staking Metis tokens and accumulating veMetis. Commons then can fill a gap in the Metis ecosystem by identifying an area of need and coming forward with the proposal. Upon approval of the proposal by the MetisDAO Foundation and existing EcoNodes, that Common will become an EcoNode providing services to the ecosystem by filling the identified gap. EcoNodes are expected to have a business model and be self-funded “atomic” entities in the Metis ecosystem. MetisDAO Foundation is expected to provide shared services to EcoNodes.

By staking veMetis Commons and EcoNodes will have governance power using the Upper and Lower Houses governance analogy.

Governance rules for becoming a Common/EcoNode and maintaining the status will be presented in the upcoming.

The ultimate goal is to empower cooperation and grow the Metis ecosystem to the benefit of every community member.

veMetis is the governance token used in Metis ecological governance voting. It will not be available for purchase or trading.

As mentioned earlier, DAC is an individual-centric, decentralized framework to support and facilitate every person’s collaboration in the web3 world, which will be on-chain, Reputation Power based, and open for community members to co-build and co-govern.

Anyone in the community can create a DAC and become a Common by staking Metis tokens and accumulating veMetis for future decision-making power.

Why become Common? Common members can make proposals and by doing so participate in the governance process.

You can invite other people to join your Common which increases voting power. You also have the freedom to choose which Common to join depending on your contribution interests, and you can quit if you are not satisfied with a Common’s decision. Common members who choose to quit lose their associated veMetis.

With this approach, every single person can exert their influence or have the freedom to choose which Common to support, which also provides a way for small token holders to gain leverage against whales.

Commons can grow into EcoNodes if they contribute to the growth of the Metis ecosystem and will fund themselves through a robust revenue model and outside investments.

EcoNodes selection will be discussed and decided by all the existing EcoNodes, coordinated by MetisDAO Foundation. DACs can apply, but applications will need to go through a governance rules-defined probation period to be qualified to become an EcoNode.

Governance rules are to be defined by all the EcoNodes involving Commons. More details on that process and two-layer (Upper/Lower houses – EcoNodes/Commons) governance to come in the, which will be published next.

Existing needs and challenges natively led Metis to the creation of the first EcoNodes: 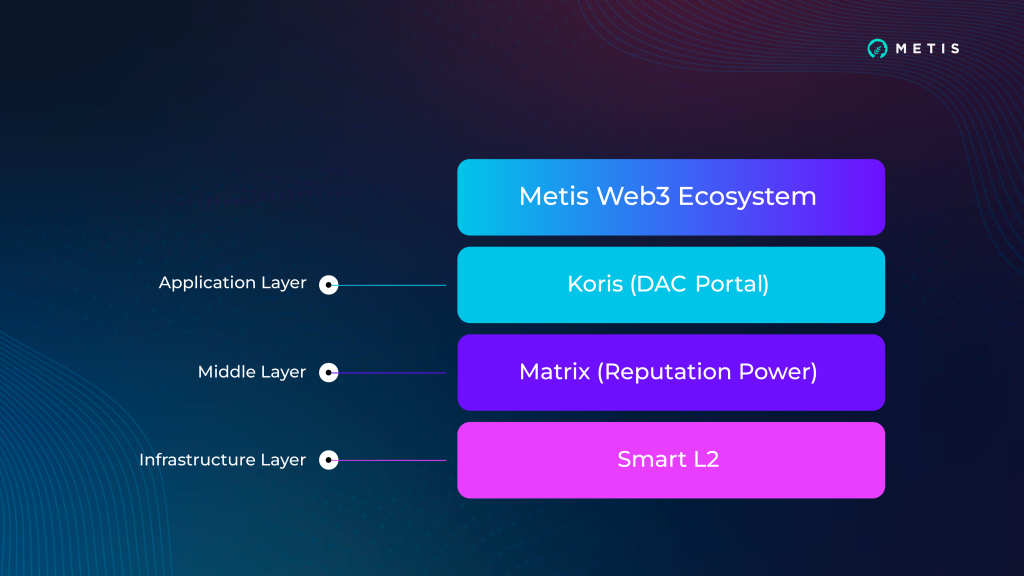 Matrix guarantees that businesses receive access to valuable, verifiable data, free of costly infrastructure, and users receive financial benefits and privacy peace of mind. We provide all-in-one privacy-driven IDaaS developer solutions that allow developers to focus on what matters most to their clients at a fraction of the cost. Users get incentivized by sharing data, and with the unique Matrix Reputation Power system, which allows gamification, developers can easily attract new and retain existing users. Welcome to the age of Democratic DataFi & IdentiFi.

Smart L2 is an Ethereum scaling tech infrastructure designed for the growing web3 economy. An EVM equivalence network that is fast, low cost and highly secure with the inherence of Ethereum decentralized security. Deploy, create and expand faster than before in a builders friendly environment.

DAC Portal is a solution for DAOs, web3 businesses, and internet native companies (web2 alike) to optimize the benefits of decentralized growth and on-chain operations.

P1X is founded by the early investors of Metis, which will be in charge of the Metis Asian community, marketing, incubation, and investment.

MetisDAO Foundation is currently coordinating the resource allocation, marketing, events, and community among all the EcoNodes. Its responsibility is to make sure that the overall health of the ecosystem is intact and as such, for the time being, MetisDAO Foundation will have a veto right to any decisions affecting the Metis ecosystem.