Blockchain technology and decentralized finance (DeFi) have been all over the media in the past year. DeFi is completely changing the way we do finance, and there are more and more companies, big and small, exploring what DeFi can do for them.

Still, one of the big challenges that new DeFi or blockchain companies face is the lack of engineering capacity with the wide range of expertise required to tackle a broad range of projects.

Developing a decentralized application involves a number of steps: writing the smart contract that handles the decentralized logic of the application; deploying all the infrastructure required by end users to interact with the blockchain and the smart contract; building fancy UI to make the interaction with your application easy and appealing for users; and optionally, building tooling to allow others to build upon all your hard work. In short, a long list of things to worry about and that requires several different engineering backgrounds. This means that if you come up with a great idea for a decentralized application, you’d typically need to raise a ton of money to hire the wide range of developers required to build it?

Fortunately, this type of problem is becoming less common, thanks to a new innovation in the blockchain space: blockchain middleware.

If you come from the IT world, you probably know all about middleware software. For those who are new to the concept, we find variations of the following definition: “Middleware is software that provides common services and capabilities to applications outside of what’s offered by the operating system. Data management, application services, messaging, authentication, and API management are all commonly handled by middleware. Middleware helps developers build applications more efficiently. It acts like the connective tissue between applications, data, and users.”

If we think of blockchain as the operating system of DeFi and the decentralized web, then the definition of blockchain middleware is quite straightforward: it’s all that software that binds everything together (including software for communication, execution, and smart contract deployments) to help developers build applications and interfaces faster, while leveraging blockchain in a flexible, safe, and effective manner.

If we depict the network stack of a decentralized application, blockchain middleware software sits between the applications’ interfaces, and the Layer 1 and/or Layer 2 of a blockchain network. 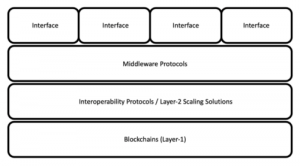 A good way to start grasping the role middleware protocols can have for the blockchain ecosystem is to think about what HTTP did for the Internet. HTTP can be thought of as a middleware protocol, as it abstracts from the low-level complexity of the underlying transport protocols (mainly TCP and IP), while offering an expressive and standard API to build any Internet application interface on top of it; this helped HTTP-enabled companies like Google, Amazon, and Facebook thrive.

Of course, these companies would probably have been able to succeed without HTTP, and they could have built their services directly on top of IP or TCP. But imagine if Jeff Bezos had been forced to invest a huge chunk of his resources into building expressive protocols over HTTP to build his online bookstore, instead of focusing on building his core business model. Amazon may have ran out of gas before becoming the juggernaut that it is today. Without middleware protocols, an API change may have required far more than the 30 minutes or so that it takes with them.

This is why I think blockchain middleware can be huge for the ecosystem. It can lower the barrier to entry of new players into the market, speeding up exploration cycles and accelerating innovation. The same way you can easily build a website without knowing anything about IP or TCP, blockchain middleware can enable developers to build new decentralized applications without knowing anything about how to create a new blockchain transaction.

If you look at the basic architecture of The Graph below, you see that it sits on top of L1 networks, and offers an API for consumers and applications (i.e. between the network layer and the application interface). This is pure middleware! 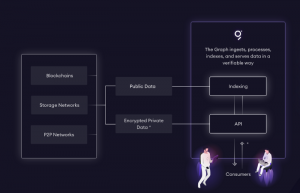 DEEP DIVE INTO A MIDDLEWARE PLATFORM

Now we know what blockchain middleware is, and we’ve reviewed some examples of middleware services according to the abstractions and problems they solve. In this section, I want to dive deeper into a recently released middleware platform called Metis Polis to wrap up my illustration of how blockchain middleware could be huge for the future of this technology.

Polis middleware can be divided into these different services:

The address of a smart contract deployed over the Ethereum network is a long string of numbers and letters that looks something like this: 0xd76b5c2a23ef78368d8e34288b5b65d616b746ae. You need to remember this address to interact with the contract’s logic. Even more, if your decentralized application leverages several smart contracts for its operation, this means remembering more than one of these intelligible strings. In the Web 2.0 world, this means having to remember by heart the IP of the servers an application interacts with. Polis’s domain service solves this problem, by building a “DNS for smart contracts”. It allows developers to create a domain to associate with a smart contract address, so that anyone who wants to interact with the smart contract can do so without having to know its address. With this feature, companies like Twitter could deploy their own smart contract and make it available to the general public through, say, twitter.metis instead of 0xd76b5c2a23ef78368d8e34288b5b65d616b746ae.

Polis’s smart contract domain service is a protocol middleware that can be seen as an alternative to the Ethereum Naming Service (ENS). It supports domain updates so that the domain owner can point to a different url. Domains are managed by a smart contract to enable domains to point to different urls, and for smart contracts to be able to call methods based on the domain as well. It also enables a domain marketplace where people can trade domains. (So go get your own Metis domain name before someone else takes it… actually I should do this myself, right now!)

One of the big barriers for the adoption of decentralized applications is identity management. Wallets are improving their UX, and DApps are becoming increasingly easier to use. Still, the fact that users are responsible for their keys and transactions need to be signed using these keys is a burden for many users — particularly people who are new to blockchain.

Polis’s solution to this issue is an upper-level middleware application manager that offers an authentication service to help app developers manage user access without worrying about wallet integration. Web 2.0 users and Web 3.0 newbies are typically not comfortable using a pair of cryptographic keys, and are more used to using passwords and authentication tokens. With Polis middleware, developers are able to generate new users for their applications, authenticated with traditional schemes, so they don’t have to worry about managing a cryptographic key pair. 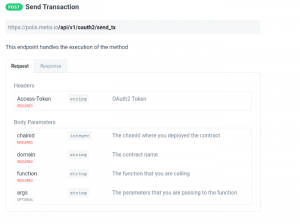 But Polis not only displays the information about transactions shown by classic explorers. It also includes a monitoring and alerting middleware that allows developers to track additional information about the activity of their smart contracts, such as:

Collectively, this adds up to everything needed to gather metrics from the use of the application at a smart contract level. Measuring decentralized application is not easy, because there is no central infrastructure orchestrating the whole operation of the system — and we can’t improve what we can’t measure. Polis makes it significantly easier to gather metrics about our decentralized applications, so that we can improve them.

I chose Polis to illustrate the power of blockchain middleware because it aggregates services from the different categories described above: from upper-level middleware like the smart contract API service to low-level middleware like the Application Manager, and protocol middleware such as the smart contract domain service. If you want to try all of these services yourself, check out this tutorial, which walks you through the use of different Polis services over testnet (no need for real Ether to perform transactions).

LOWERING THE BARRIERS FOR INNOVATION AND ADOPTION

To summarize, I believe that blockchain middleware will lower the barriers for innovation and adoption in the blockchain world. By abstracting from the low-level complexities of blockchain technology, DApps will become more user-friendly, while engineers with different backgrounds and from other fields will be able to build decentralized services themselves, with little to no blockchain expertise. And all this while we invest on making the Internet more decentralized and open for everyone.

I can’t wait to see the great ideas that people from other fields and without blockchain expertise come up with once they start building their services by leveraging middleware software. Is the next Google or Amazon coming from the blockchain space? We’ll see. What is clear is that the future looks bright!