Everyone is excited about NFTs and the market cap of cryptocurrencies these days, but you know something I think people will be increasingly excited about (again) in the next few years? Decentralized Autonomous Organizations (DAOs). It seems like no one talks about DAOs anymore, as if they were only a crypto trend that ended up passing us by. But the truth is that DAOs are alive and well, and many teams are already leveraging them to govern their blockchain projects, with many more to come. We should expect DAOs to become first-class citizens for blockchain’s future and, hopefully, for the broader future of work.

A GENTLE INTRODUCTION TO THE PROBLEM AND THE CONCEPT

So what exactly is a Decentralized Autonomous Organization, or DAO? Governance at scale has always been a really hard problem for the blockchain industry and society as a whole. Especially when it comes to fostering fairness for all participants. Traditionally, we have relied on a set of centralized entities to manage the resources of a community, and make decisions on behalf of all the participants of a system. The reason for this has been the inability to scale a governing system to allow the involvement of every member willing to participate in decisions, fairly resolve conflicts, and distribute the influence and power of each member.

Something similar happens in corporations, where usually shareholders and the board have final say on the decisions that impact the company, while users and employees also have huge stakes in the corporation. Ideally, all of them should have a say according to their power and involvement in the organization. The problem is that such a scenario would lead to conflicts and a really inefficient system. So we again delegate governance to a central entity.

And what happens when we introduce a mix of external participants that may not be trusted but still want to participate in the system? Then not only do we have the problem of building scalable governing systems which are fair, we also introduce the problem of “fair exchange,” which says that a fair exchange between untrusted parties is impossible without a trusted third-party. So how can we build a scalable governing system that enables fair exchange and interaction between different participants that may not trust each other? This is where DAOs come into play.

Simply put, DAOs provide an operating system for open collaboration. This operating system allows individuals and institutions to collaborate without having to know or trust each other. They leverage the blockchain and a set of smart contracts as their “trusted third party” that enables the fair exchange and interaction between the different participants within the system.

AOs tackle a problem in economics called the principal-agent dilemma. It happens when a person or entity (the “agent”) has the ability to make decisions and take actions on behalf of another person or entity (the “principal”). If the agent is motivated to act in its own self-interest, it may disregard the interests of the principal. This situation allows the agent to take risk on behalf of the principal. What deepens the problem is that there might also be information asymmetry between the principal and the agent. The principal might never know that it is being taken advantage of and has no way to make sure that the agent is acting in its best interest. Doesn’t this remind you of how governments and big corporations work these days?

Thus, DAOs specify all of the rules of operation for an organization or community in a smart contract. This smart contract is the third party through which we are delegating the implementation of the governing rules of the group. Every member can interact with this smart contract to issue a vote, make a proposal, or simply delegate a decision to someone else.

The rules and transaction records of a DAO are stored transparently on the blockchain. Rules are generally decided by stakeholders’ votes. Typically, the way decisions are made within a DAO are through proposals. If a proposal is voted on by a majority of stakeholders (or fulfills some other rule set in the network consensus rules), it is then implemented.

DAOS AS AN OPERATING SYSTEM

Let’s say that by now I’ve convinced you of the theoretical need of DAOs, but you are wondering “how does this work in practice, and what are they currently used for? Because governance, autonomy, etc. are quite abstract concepts”. Fair enough, let’s jump into some examples of projects implementing DAOs, or at least governing-like DAO schemes.

An excellent example of DAO-like decentralized governance can be found in big DeFi projects like Uniswap or MakerDAO. These projects have their own governance token that may be used to make proposals for the platform, and vote on existing ones. With this, these platforms ensure that the final call for the development and integrity of the platform is in the hands of its users. Both these projects implement a similar governing system based on this governance token.

MakerDAO’s governance token, for instance, is the ERC-20 MKR token. MKR can be used by its holders to make decisions on the operation and development of the project. It can be used to execute changes in the protocol parameters, determine the Debt Ceilings, or elect the role of different individuals in the project. The voting power of someone in the system is proportional to their MKR balance. The tokens are created and destroyed under different circumstances.

Uniswap uses a similar approach to governance. It has the UNI token that holders can use to vote and influence the development of the platform. The governance framework defines a specific process to get proposals from its creation to its execution. This is a great example of the kind of rules that can be implemented in a DAO to orchestrate a system. 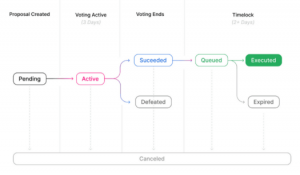 What these governance systems and frameworks are enabling are publicly-owned and self-sustainable infrastructures that continue to carefully protect their indestructible and autonomous qualities. The blockchain and governance smart contracts are acting as the required third party, allowing rules to be defined and evolved by the actual participants with a stake in the system, not by self-interested parties.

We just saw two examples of how governing frameworks are enabling self-sustainable infrastructures and platforms governed by their users. But there are also full-fledged DAOs operating as organizations that direct their funds and efforts towards the desires and targets of their users and stakeholders. A good example of this is MolochDAO.

MolochDAO is a Decentralized Autonomous Organization focused on managing a fund to promote technical research in the Ethereum ecosystem. Stakeholders can buy MolochDAO tokens with ETH and become stakeholders of the DAO. This gives them power of vote on the grants and projects that will be funded by the DAO. Finding funding to research hard problems in the Ethereum ecosystem where many companies don’t have a clear business case or sustainable funding may be challenging. But thanks to the DAO structure, different investors and individuals may collaborate to invest in the future of Ethereum.

So we’ve seen the value of DAOs for governance in blockchain-related projects. This governance is implemented at the core of the protocol and is part of how the system operates. But DAOs can also be used to orchestrate other decentralized communities outside of the blockchain, such as open-source projects. Unfortunately, these projects can’t focus on building a core protocol to help them govern the system, as doing so would require a lot of additional effort and resources that they lack. Fortunately, a few projects offer a framework to start operating DAOs in no time. One of those projects is Metis.

Metis introduces the concept of DACs (already mentioned in my previous publications). DACs (or Decentralized Autonomous Companies) are a type of DAO that not only solve the governance problem, but also tackle management and incentives of autonomous and decentralized communities. You can see why they are a perfect fit for communities like the ones organized around open-source projects.

Metis DACs work like the DAOs we’ve been discussing throughout this article. Namely, holders of the DAC token are entitled to participate in the decisions and day-to-day operations of the organization, with the slight difference that in order to join the DAC, members need to also stake some of their own tokens in advance. This prevents “destructive members” from joining the organization. Right now, anyone could buy some UNI and try to harm Uniswap by voting for harmful proposals. To prevent this from happening, members willing to join a DAC must have some stake in the DAC.

Staking in a DAC is not only used to ensure that members have something to lose if they harm the community. It also offers a way to earn reputation points and increase a member’s voting power in the system. Uniswap users that have recently joined the system have the same voting power as loyal, long-standing ones; there is no incentive for loyalty. DACs tackle this problem by improving a member’s reputation according to the time they’ve been staked in a DAC.

Metis’ goal with DACs is to build a fair, transparent, and universal mechanism to empower community members to collaborate without worries. From funds management to governance and incentives, everything can be handled with a DAC in an autonomous way. Metis already offers a framework to easily deploy a DAC, mint the DAC’s token, and start onboarding participants and orchestrating the day-to-day operations of the community.

THE FUTURE BELONGS TO DAOS

DAOs are an incredible innovation for blockchain platforms. From my point of view, they’re the killer app of blockchain, and we should expect more and more companies, communities, and organizations to start adopting the DAO framework. As shown for the case of DeFI, DAOs are currently focused on governance. But projects like Metis are already introducing new dimensions to DAOs, with the DAC framework able to handle much more than just governance, with incentives and management being just two of the biggest tasks that can be artfully handled by a DAC. If you want to read more about how DACs work and what they can do, check out this article.

What can we expect the impact of DAOs to be in society? Well, I may be optimistic, but thanks to DAOs I envision a future where “employees will be able to ‘try-before-they-buy’ with prospective employers; employees will have a much greater voice in company decision-making; identity-based voting mechanisms will play a formal role in governance; and full-time, monogamous work at one company may well become the exception, not the rule.”

And you know the funny thing? All of this can be built today…and more and more projects are already doing exactly that.